Sondheim’s musical “Merrily We Roll Along” is currently enjoying a revival in New York and I couldn’t be happier that it’s back. The show has an unforgettable score and a legendary history of being a brilliant, beloved failure. Well, “failure”‘s not a really fair description. Merrily challenges audiences and casts because of the way they tell the story: it’s backward. The Story It’s a pretty simple story told the traditional way. Two young guys and a girl are best friends and colleagues, all working to break into show business. They hang out together, brainstorm ideas and cheer each other on while the rest of the world ignores them. Eventually, they each catch that all-important break but success does what years of failure couldn’t do; it splits up the team. Like I said, a simple story and a sad one when you tell it that way. But tell it back to front and watch what happens! Right out the door, there’s the climactic fight that murders a friendship that existed for decades! Then back up a bit and you watch the information bomb drop that makes that last fight inevitable. Back it up again and you see the same characters again,…

It’s January, a good month in many ways, but one that makes me (and lots of folks around here) watchful. Maybe, even a bit paranoid. Not because we’re still feeling the effects from the excesses of December (though some of us are) and not due to the tax returns looming in our future. We’re worried because the weather is unpredictable in January and it can be extreme. And our history with schizoid temperatures around here makes amateur meteorologists (and curmudgeons) out of many of us. Dressing for the weather Let me give you an example. Monday, the temp outdoors went into the 60’s or higher. How much higher, I’m not really sure. Because I was inside, sweltering in a chin-to-knees sweater I’d worn because, hello, it’s January. Then the temp dropped like a rock, indoors and out, and I spent Thursday and Friday curled up in layers of clothing and huddled around reheated cups of coffee. No wonder everyone seems to have a case of the sniffles! January temps rise and drop like a roller coaster. And that’s a problem when you live with Southern Architecture. Officially, this is a humid, subtropical region and our houses are built for that….

financially, it’s never been a good time for me to fly to New York.  So I  dreamed and figured someday I would go there.  I just never thought my money would get there first. 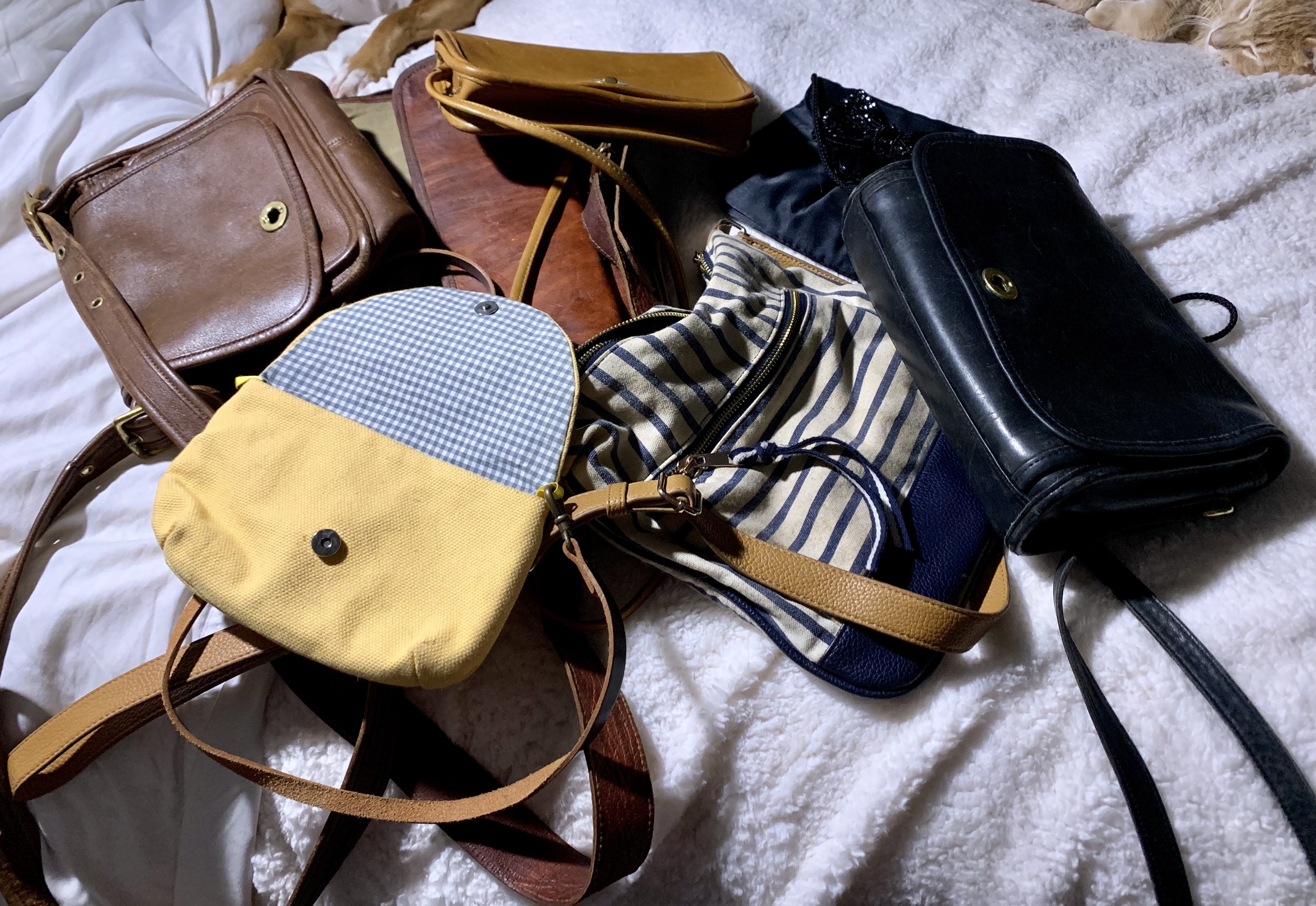 Everyone who becomes an Adult goes through some Rite of Passage. It may be a formalized religious ritual (like a Bar Mitzvah) or something secular, like a Driver’s Permit. But there are talismans we gather as we go through life and the world expects us to keep them handy. Well, I just threw one away. I enjoy being a girl Yeah, that’s what the song says. Only the lyric didn’t apply to me growing up, not once I saw the accessory list. Have you ever noticed how much extra stuff women are expected to carry? Guys go from grade school, through high school, to life, and the only new thing they get is a razor. Girls get those too but they’re also supposed to start wearing costume jewelry at some point. And make-up. And perfume. Girls are expected to do complicated things with their hair. And finally, girls are given purses so they can tote all of this extra girl-stuff around. Some of the Bags that Ran my Life… If you can’t tell, I’m not a purse fan. More accurately, I’ve been a purse-hostage. For the past 50 years, wherever I’ve gone, some satchel’s hitched a ride on my shoulder….

Everybody has New Year’s traditions. Some people make and break lots of good resolutions. Some people serve black-eyed peas and greens. But that’s not my thing. While others are nursing hangovers or glue themselves to televised bowl games and parades, I’m outdoors, weather permitting, doing yard work. And I’m looking for my New Year’s Day miracle. Yard Work? There’s something so satisfying about clearing the yard, once the last of the leaves have fallen. You can rake and rake without breaking a sweat, and when you’re finished, there’s visible improvement. Actually, this is the small part of the year when I can get ahead on my weeding. Once growing season starts, it’s all I can do to stay even. And I quit once the temp gets too hot. So January and February are the months when I reclaim parts of the yard from the plant invaders, like kudzu. But New Years is not for reclaiming. It’s when I look for a miracle. In Search of Spring Now I’ll be the first to admit I don’t get along with Winter. It’s (usually) too wet and cold for my taste and I miss long, sunlit days. And, while I love where I…