Tales of a Failed Domestic Goddess

Maybe it’s because of the Season. Or because I had too much time off. Or maybe it’s because my Darling Husband streams the British Baking Show whenever possible. For whatever reason, I lost my reason today and tried to make Scones for Christmas.

Ever since we went to England this fall, I’ve developed a penchant for Scones. Not those dried, too-sweet biscuits with the hard rock sugar glaze they sell at the bakeries here, but proper scones served in English tea shops. Thick, warm, rich, flaky things with just a hint of sweetness. I can’t find those anywhere. So today, with a day off and England on my mind, I decided to try to make some myself.

Now, I am no one’s idea of a baker. I mean I got D’s in Home Ec. (They don’t flunk you if you show up to class) But with all the baking blogs out there, I figured I’d find one with enough scone-making tips to make a product worthy of a Paul Hollywood handshake.

I bought the ingredients listed in one promising baking blog and was back in my kitchen before I noticed the first problem. The blogger included baking powder in her recipe but she forgot to write down how much! Now I’ve learned the hard way that proper measurements are paramount in cooking. But that detail was missing. So, I cross-referenced other scones recipes on the ‘net and learned not all authorities agree on Scone ingredients. Some actually prefer baking soda to powder (and even I know those things aren’t the same.) About that time, my sister (an expert baker) sent me pictures of the scone mix she uses. “Consistency of scone batter has to be exact” Sis texted. “That’s why I’ve never made them from scratch.” What a time to find that out!

I went back to the baking blogger who assured me batter consistency wasn’t the issue. No the secret to great scones (she said) is temperature. Assemble that mixture with heavily chilled liquids and frozen, grated butter. Oddly enough, there was butter in the freezer (that’s what happens when my husband stores the groceries) and my grater was in the gadget drawer. But the grating didn’t work out well. Instead of falling from the grater into the bowl, the shaved butter clung to the underside of the grater. When I tried to scrape it off, the bits of grated butter clumped back together again. I finally got the clumps to stay in the bowl, and coated them with the drier ingredients. But it didn’t look consistent to me.

When I began assembling the liquid ingredients, I realized more measurements were missing, and went back to recipe cross-referencing. This took so long, I began to worry my dry mixture bowl was warming up and decided to move it into the freezer. Which is when I tripped over the cat, and the dry-mixture bowl went flying.

While cleaning up the kitchen, I froze the remaining dry mixture, re-calculated the needed amounts of wet ingredients (you ever try measuring out 3/4 of an egg?), and thought wistfully of bakery scones. Maybe they weren’t so bad after all. Still, I was halfway through the directions. There was nothing left to do except assemble, shape, bake…and pray.

Once I found the preferred oven temperature (on yet another blog) I dumped the wet and dry ingredients in together and molded them into one lump on my pizza stone. As quickly as I could, I shaped the lump into an inch thick circle of dough and sliced it into triangles with my pizza cutter. I’d slid the slices onto a parchment-covered cookie sheet and into the pre-heated oven before I noticed the Baking Blogger’s last bold warning “Chill the sliced dough another 15 minutes before baking, in order to keep the scones from spreading!”

Well, damn. But it was too late. My lumps of dough had already been brushed and forced inside the Inferno. Sadly, I remembered all my other kitchen misadventures. The apple crisp that morphed into apple alka-seltzer when I mixed up “t” and “T” in the measurements. The jelly that leaked through the thumbprint cookies and sealed itself to the floor of a hot oven. The meatloaf that became meat cake when I mixed up the sugar and salt. Obviously, I was an anti-cook and Scone experiment was going to be another disaster.

As I watched, the scones began to spread, just as the Baking Blogger warned. But they weren’t really losing height. If anything, they were a bit taller. Wider and bigger they continued to grow, while I wondered about the amount of baking soda. Was this right? We’re they supposed to heedlessly grow, like Topsy? Or had I re-created the Blob?

Well, here they are in their Blueberry glory, about twice the size I anticipated. And if they aren’t the glories I tasted at Stratford-on-Avon, they don’t look like they fell on the floor. Maybe, as my sister suggests, they are a holiday miracle. That’s enough for an anti-cook, like me.

I wish you well with your holiday glories. May all your dreams rise and not burn. 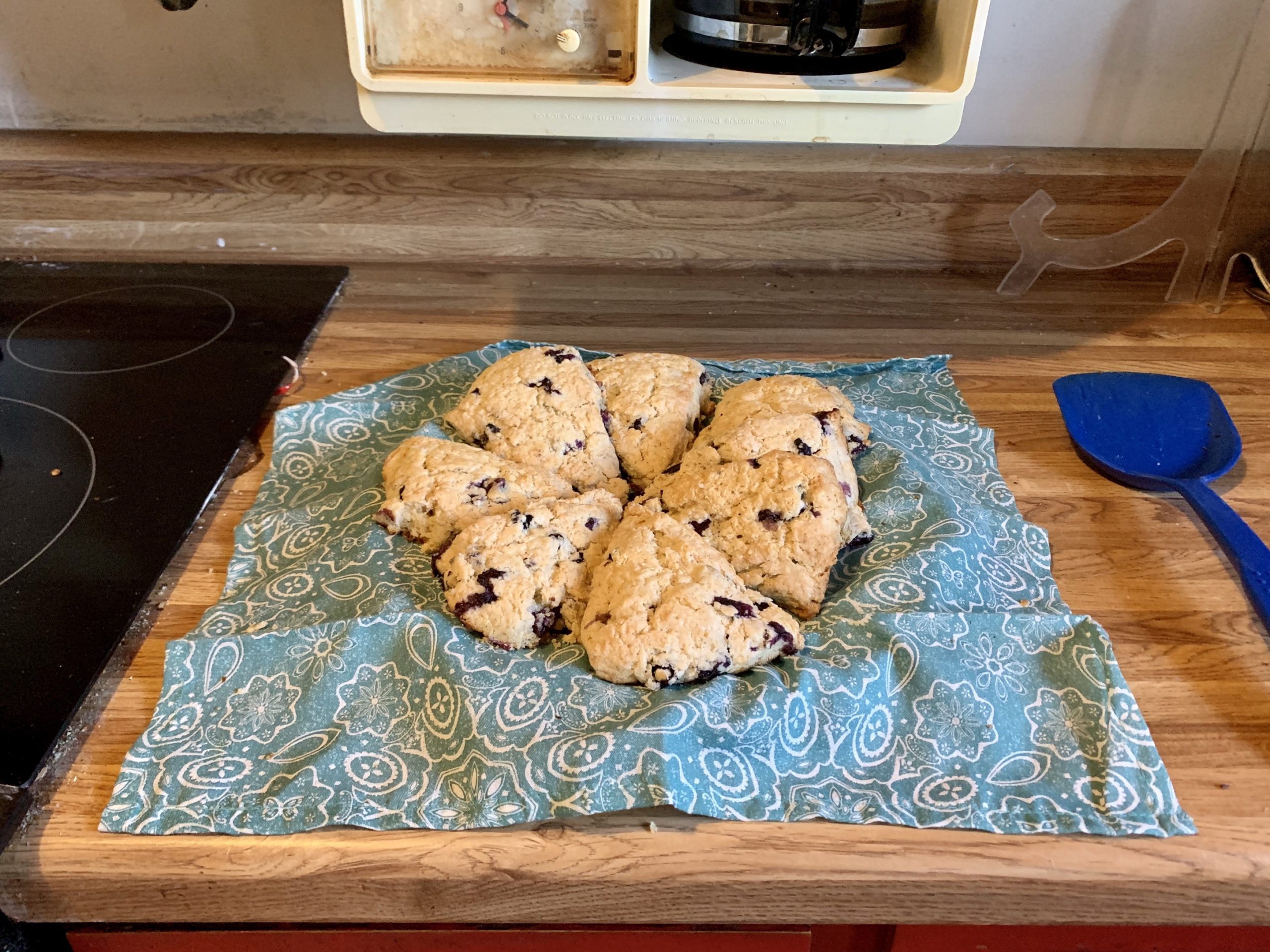